XTF is a font file format used in the Dashboard. It became famous for being exploited.

The fonts were designed by Steve Matteson for use in the Xbox Dashboard as well as for promotional materials.

The XTF versions of these fonts contain 7365 glyphs each. 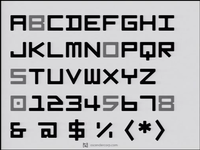 The mesh data is stored as triangle list. 3 indices per triangle.