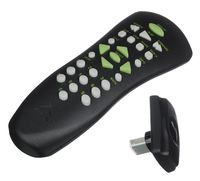 The DVD Movie Playback Kit contains 2 parts: A remote and a dongle for the Xbox.

The dongle contains a ROM with an XBE which provides some functions for the DVD playback application. However, the XBE is not standalone.

Why would they not just put this little < 512kiB library on the harddisk? Why another ROM which contains the program? One could think it is to allow them to upgrade the application easily, but the real reason seems to be different: licensing. As the label on the back notes: "Made under license from Dolby Laboratories". By including the software in the DVD Remote kit, they don't have to pay Dolby for every Xbox sold, but just for every DVD Remote kit sold. This allows them to keep the cost of the Xbox down.

Additionally the dongle contains an IR receiver to receive commands from the Remote control.

Different versions of the dongle seem to use different hardware internally. 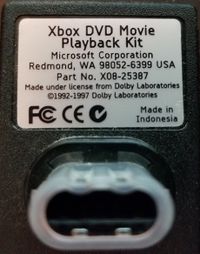 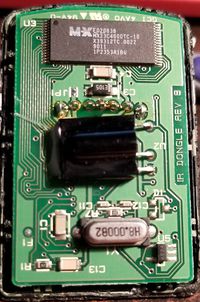 This big square IC on the backside is the microcontroller. STMicroelectronics describes it as "8/16-BIT FULL SPEED USB MCU FOR COMPOSITE DEVICES WITH 16 ENDPOINTS, 20K ROM, 2K RAM, I 2 C, SCI, & MFT". Since the program resides inside in its ROM, it is almost impossible to extract the program from inside.

This black box on the middle of the frontside is an integrated IR receiver. It filters the received infrared pulses and demodulates them. Its filter frequency is 56kHz, while 38kHz is standard for most remote controls. Therefore, chances are few other remotes will work with the Xbox receiver.

This wide TSOP IC on the frontside could be the most interesting of all. It is a 4MBit mask ROM.

This 20-pin standard logic IC is an octal D-flipflop, which splits the databus from the 92163 to 8 adress bits. This technique is very well known from the 8051 and other microcontrollers.

As the dashboard presumably downloads the code from the ROM into the memory of the Xbox, this could be a hardware hack requiring no hardware modifications. The XBE loader for the DVD image is different from the usual XBE loader. However, the XBE is still signed and checked for security.