The hardware side is USB with a different plug while the software side is USB without HID-descriptors. Technicly a XID is a USB-hub for the Memory-Units and the XBL Communicator. The logical XID gamepad USB device is internally connected to that hub.

The Xbox's Input devices are USB devices. As such, you can connect a keyboard to the Xbox, or a gamepad to your PC. In fact, Linux already has drivers for the gamepad. In order to preserve Xbox hardware, please do not cut OEM Xbox cables to make an adapter; decent adapters can be acquired cheaply (~$10 USD ea. on 2017.04.30). 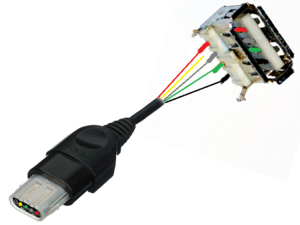 Wiring diagram to show how male Xbox controller plug maps to standard female USB connector. White cable color is depicted as gray for better visibility. The yellow cable is not connected to the USB side, as it's exclusive to Xbox.

Untested / unverified! Take this with a grain of salt.

XID are similar to HID but have custom Vendor requests

Actual length is truncated to size of descriptor or wLength. Whichever is smaller.

This is an example XID descriptor taken from a Steel Battalion controller.

This is an example XID descriptor taken from an official Microsoft DVD Movie Playback IR dongle.

Actual length is truncated to size of report or wLength. Whichever is smaller.

The data will be similar to the GET_REPORT, but instead of storing actual values, it will have bits set (1) where the bit is valid in the respective report. If the bit is auto-generated, it will be cleared (0).

In case of the interrupt-in, there is another status which can occur now:

There are a few hardware re-designs of the Microsoft Gamepad.

There are also dedicated Part Numbers for color variants:

The Microsoft Controller S will not react to packets which don't have a value of 6 in the length field of the header. The Fanatec Speedster 3 ForceShock will still react to those. Further testing is necessary with other gamepads.

The Pedals are not a USB device.

Note that the cable going to the pedals is also not a USB port despite using the Xbox controller breakaway plug. Likewise, plugging the pedals to a PC / Xbox won't provide a USB / XID (it is detected as garbage):

Always connected to port 1 of the internal HUB

YouTube reviewer report this joystick to have rumble support.

This is an unlicensed / unofficial Xbox accessory.

The website for this product can be found at http://www.hkems.com/product/xbox/EMSTopGun2.htm

The gun presents itself as a standard Xbox gamepad. It uses a different USB descriptor for Xbox (X) and the other mode (P). There is no internal hub in this device.

There is no right thumbstick, thumbstick presses, black/white button or trigger buttons (All of those read constant zeros).

The upper part of the gun is moveable and should push back to simulate recoil (possibly hurting your thumb while you are using the stick). I could not get the force feedback working, but I'm sure I've had it working in the past on PC.[citation needed]

This is the descriptor in the Xbox mode (X).

This is an unlicensed / unofficial Xbox accessory.

The third party light gun from Joytech reports itself as 2 devices and mentions pattent US6287198 it came with a detachable viewfinder scope without any magnification. a red dot apears in the viewfinder, its a reflection of a red led, powered by the gun over usb. 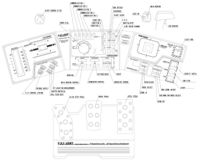