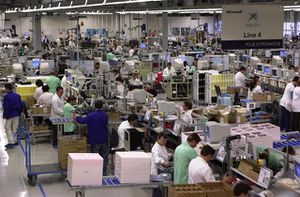 The Xbox was manufactured by Flextronics in four locations throughout its lifetime: Guadalajara, Mexico; Sárvár, Hungary; Doumen, China; and Taiwan[FIXME].

An example of a serial number sticker

Every Xbox has a sticker on the bottom with a manufacturing date and a 12-digit serial number. The serial number encodes information about where and when the hardware was manufactured.

Using the pictured serial number as an example:

The bar code is the 12-digit serial number in standard Code 39 format.

The Xbox was manufactured just like many other mass-produced electronic products. Printed circuit boards were made in bulk and populated by pick-and-place machines, the plastic case was formed by injection molding, and finally all of the pieces were assembled by hand on production lines.

The overall process didn't vary much between hardware revisions. The only notable change was related to the BIOS ROM. Up until version 1.6, the BIOS was flashed onto a TSOP ROM before being soldered to the motherboard. Revision 1.6 introduced the Xyclops chip, which integrated both the System Management Controller and the BIOS ROM on a single die. This meant the BIOS had to be flashed by the chip manufacturer instead of on the Xbox production line.

When a fully-assembled Xbox reached the end of the production line, it had a:

To initialize the EEPROM and hard disk in the final stage of production, a technician would insert a DVD containing a setup program. The setup program, named default.xbe just like any other primary Xbox executable, was built by the XDK with the "allow eject" flag set and the region code set to 0x80000000 ("DEBUG").

Then the DVD can be ejected and put into the next Xbox.

This XMTAXBOX.XBE is an XBE retail-signed for hard disk, also with the region code set to 0x80000000, that does the following:

A new Xbox still contains the file XMTAXBOX.XBE on the first cache partition, as well as some temporary files on the third one.

Xbox kernels since version 4034 have another backdoor that even works if the EEPROM check succeeds: If bit 30 of the media flag of an XBE is set, the condition of the hard disk is ignored as well. This change allows Microsoft to replace broken hard disks without replacing a valid EEPROM on an Xbox sent in for repair. Before this change, they had to rewrite the EEPROM whenever they replaced the drive.

This article is adapted from Xbox Manufacturing Process by Michael Steil. Its content is reproduced here under the GNU Free Documentation License 1.2.